A virtual program series with award-winning author and artist, Carol Tyler. Discover her story while she teaches you to put your memories on paper.

Carol Tyler is one of the most important and influential artists to come out of the Alternative Comics movement of the 1980s. She is known for her beautifully written and drawn autobiographical stories. 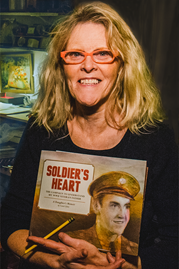 Carol was born and raised in Chicago. She received her Masters from Syracuse University in 1983. After some years in NYC, she moved to San Francisco and began getting her comics published in R. Crumb’s Weirdo. At ComicCon 1988, Tyler was awarded the Dori Seda Memorial award for Best New Female Cartoonist.

Tyler has many books. There’s the graphic masterpiece Soldier’s Heart: The Campaign to Understand My WWII Veteran Father, A Daughter’s Memoir (2015) which began as the You’ll Never Know trilogy. Soldier’s Heart describes the author’s damaged relationship with her Dad, and how his untreated PTSD shaped her childhood and affected her relationships into adulthood. Soldier’s Heart received the Gold Medal of Excellence from the Society of Illustrators and received the slate.com Cartoonist Studio Prize for Best Print Comic of 2015. It also received rave reviews from many prestigious magazines and newspapers, including the New York Times. Soldier’s Heart was named on Time Magazine’s Top Ten Comics of the year list, and Rolling Stone Magazine placed it on the list of Top 50 Graphic Novels of all time. It earned eleven Eisner Awards nominations, 2 LA Book Prize nominations, and an Excellence Award from the Ohio Arts Council. Her brilliant The Hannah Story was named on the list of the Top 100 Comic Works of the 20th Century. She has two additional solo short story collections, The Job Thing (1993) and Late Bloomer (2005).

Her current book is called Fab4 Mania. Inspired by a series of keepsake booklets Miss Tyler made when she was 13, Fab4 Mania is a first-hand account of seeing the Beatles in 1965. Next up in 2022: The Ephemerata: Shaping the Exquisite Nature of My Grief.

Professor Tyler teaches Comics, Graphic Novels & Sequential Art at the University of Cincinnati DAAP School of Art and is a Residency Artist with the Ohio Arts Council.